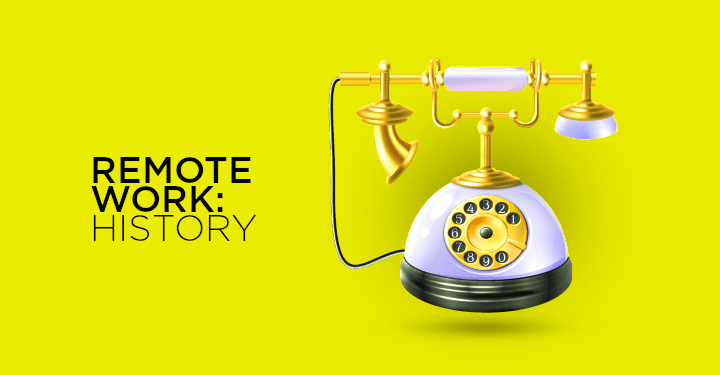 When most of us hear the term “remote work”, we instinctively jump to the modern version of the concept – the idea that with improved technology and increased mobility, working together doesn’t require physically being together. While we imagine the idea having been popularized by millennials, the reality of remote work is centuries older than any of us.

In the early days of human society, the hunter-gatherer humans held no distinction between work and home – the work of the day was to source food and supplies which would create a viable living environment. Although this is hard for us to relate to, it’s not terribly different from the way we work today.

Later into our history, human had gathered into townships and communities, with everyone contributing something different to their surrounding society. During these days, the lines between “home” and “work” continued in their blurry fashion. For example in Britain, nearly every commoner lived in a “workhome”, a dwelling that contained both a place of business, such as an alehouse or bakehouse, and their home.

During the industrial revolution, workhomes became less popular as factory, warehouse and large scale production operations began to eclipse smaller, home-based businesses which simply could not match their efficiency. During this era, the concept of “going to work” became popular. Work was one place, which involved rigid hours, predictable pay and specialized skills, while home was a separate place for eating, raising a family, and sleeping. This system had its benefits, but it deeply affected the fabric of our societies, families and daily lives.

During the 1970’s, remote working – dubbed “telecommuting” by a NASA employee in 1972 – saw its first spike in prevalence in hundreds of years. Thanks to increasing communication capabilities, especially in modern companies such as NASA and other government agencies, remote work seemed appealing for all. In fact, the American government launched a program specifically aimed at hiring a remote workforce, thanks to the decreased costs and administrative requirements of such a setup. While the idea caught on for a small group of workers in very specific industries, it never became mainstream, and didn’t spread widely outside these circles.

In 2009, remote work became more popular than ever before. Continuing its tradition of remote work trailblazing, the US Office of Personnel Management reported more than 100,000 federal employees to be working remotely by 2009.

Dozens of leading companies boast remote work policies, whether relying on full-time remote workforces, allowing partial work-from home flexibility, or simply having an open, need-based system that eases the rigid schedules of traditional offices. Moreover, many young startups reliant on a millenial workforce don’t even bother with remote work policies – it’s simply a given in many sectors.

It’s plain to see the benefits of remote work for the employees – no commute, fewer distractions, unprecedented flexibility. However, it’s not a one-sided deal: employers can also reap the benefits, the most prominent of which is a marked increase in productivity, plus an uptick in worker satisfaction and retention.

Today, companies that don’t offer at least some form of a work from home benefit are falling behind competitors. For jobseekers, the difference between two companies may just come down to this very benefit – so isn’t it worthwhile for just about any company to offer this perk?

A better way to ask this is to question “why not?” In its essence, remote work is an investment that requires no investment – a perk that not only saves companies operating costs, but pays dividends in countless other ways both tangible and not.

In years past, garnering a viable remote workforce may have been costly and difficult – can you imagine the effort required to coordinate people across time zones without tools as essential as email and chat? Additionally, the attitudes toward remote work were very different. Many workers likely assumed the setup wouldn’t work for them, and imagined being disconnected from coworkers would only make life harder. Investing in the people and tools that would enable a team of telecommuters may have been difficult and costly back then, but today, it’s a whole different story.

The vast majority of teams already have the tools in place to make remote work a reality. Everyone from real estate professionals to marketers, to CEOs are enabled with tools that let them talk to their team in real time, exchanging important documents, establishing priorities and delivering feedback.

Employees themselves are changing too – the vast majority of workers are prepared to take on a remote work opportunity, and consider it a major factor in their quality of life. It would be more difficult now to find employees who don’t want remote freedom. It costs the company nothing, and gains the company immeasurable improvements in a multitude of areas. So again, if leaders are asking themselves “why?”, they may want to re-evaluate and ask “why not?”