Working out of the office is considered less productive in Poland - you'll agree on this.


Where does the truth lie?

A considerable number of managers is afraid of performance decline of employers that simply aren’t within their view. It has been confirmed by Zdalny Ninja team that conducted a survey on over 200 participants.

This concern has a rational explanation, though. A few days' observation of behaviour at the office suffice to get suspicious of the way the time would be squandered at home. Take a look at an infographics depicting this phenomenon, compiled by NICE in 2012: 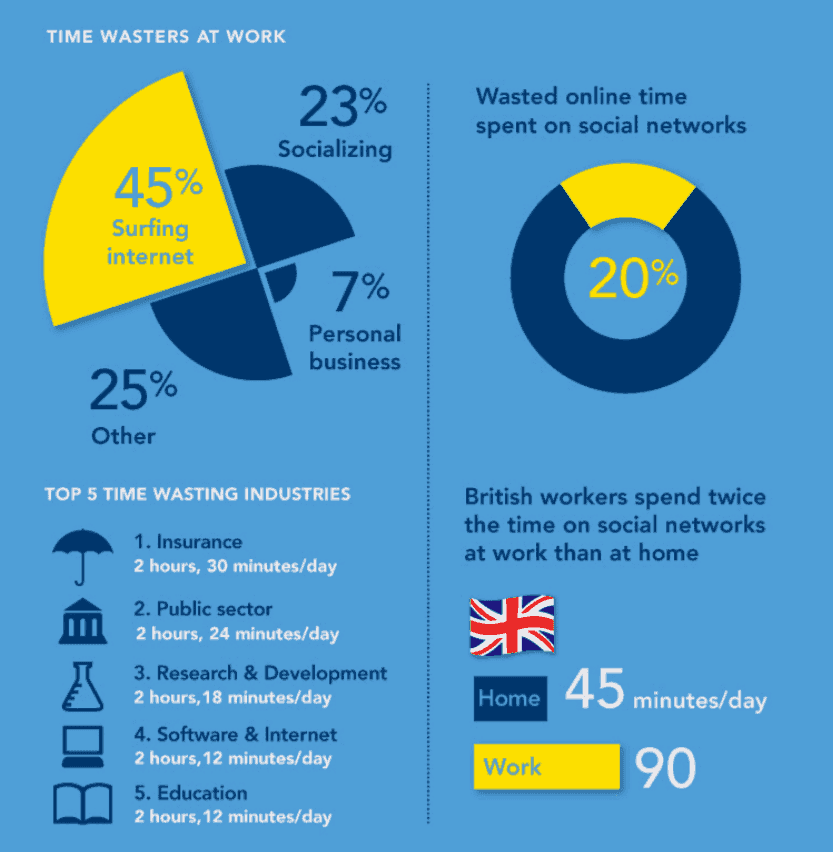 What can be observed? The reality isn’t as bad as predicted. Notice that the time spent on social media at home is half as long as social media time at work. Obviously, it is influenced by a multitude of factors. What is more, these ratios might be slightly different today as the research has been carried out 5 years ago. However, there’s one conclusion. If employees want to surf the Internet or run their private errands during working hours, they will do it both at home and in the office. Boss’s vigilant eye doesn’t help much.

Another example: a call centre Ctrip carried out a research with cooperation with Stanford University. The participants were allowed a home office for 9 months. A control group that stayed in the office eventually made up a half of employees that call the clients. The survey results and gathered performance ratings were quite baffling. It turned out that the remote employees felt more satisfaction with their work. Even 50% of subjects resigned from work less often and they were more effective than their colleagues from the office – making 13,5% more phone calls.

Remote work has another – seemingly unnoticeable – benefit, enabling to engage the talents not only from the company’s surrounding area. Thriving American airlines JetBlue are convinced of that. The company permits its employees to work in its headquarters only 3 hours a week, and the rest of the working hours means remote hours. It turned out that 3 hours is perfectly enough to maintain sound relationships with the team. At the same time, JetBlue has a considerably greater outreach for searching qualified employees that agree on work commute once a week - educated, skilled mothers being among them. Until now, this group had been considered as a financial threat in other organizations. In JetBlue, they forge a company with high efficiency.

Even at the stage of recruitment, you can validate whether your candidate is a good match for a remote employee. Since you have a much vaster range as you don’t need to limit yourself to a local labour market, you have the best candidates to choose from.

Hire those candidates you are ready to trust – it’s perhaps obvious. Your lack of trust in an employee indicates a poor managerial decision already during recruitment. It was nicely put by Chris Hoffman (IT Collective, 100% remote company):

A physical office space has been used by managers as a safety net. They could sweep a disarray in their team under the rug rather than deal with it. A possibility to go to and fro around the corridor every 15 minutes to control every microtask of their employees might – sometimes – conceal bad recruitment decisions.

He also says that if an employee cannot manage his or her own schedule and workload, IT Collective discontinues cooperation. There’s a place for possibility to complete a team resulting in a coherent organization, where everyone is its valuable contributor.

Be a manager, not a nanny for your employees

The examples above emphasise an essential manager’s feature – again, a trust in their employees. If you’re an employer and you assume people you’ve hired are as busy as a hibernating bear, perhaps it will be so – if only because of self-fulfilling prophecy. The results follow low expectations. However, treating them as responsible adults is enough for them to overfulfill you assumptions.

If you’re an employee, answer the question. What do you prefer: your manager checking your tasks every now and then, or better your manager evaluating you when you finish the tasks already? I think the choice is simple, and it depends also on you whether someone will breath down your neck. Work in keeping with a given commitment, and you’ll gain incredible latitude.

The article is a part of ebook debunking remote work myths, available in Polish on a website: ZdalnyNinja.pl. It’s involved in a project which aim is to encourage employers to cooperate in a better way – a remote way. You’ll find here a handful of concrete, proven arguments and examples experienced firsthand, telling you how to organize a scattered team in a best way.