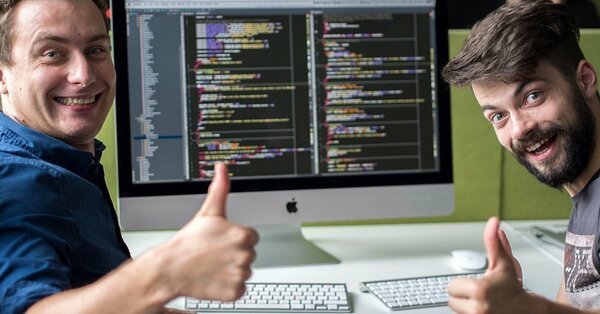 Software development teams often make decisions about software architecture or technological stack based on inaccurate opinions, social media, and in general on what is considered to be “hot”, rather than solid research and any serious consideration of expected impact on their projects. I call this trend Hype Driven Development, perceive it harmful and advocate for a more professional approach I call “Solid Software Engineering”. Learn more about how it works and find out what you can do instead.

Have you seen it? A team picking newest, hottest technology to apply in the project. Someone reads a blog post, it’s trending on Twitter and we just came back from a conference where there was a great talk about it. Soon after, the team starts using this new shiny technology (or software architecture design paradigm), but instead of going faster (as promised) and building a better product they get into trouble. They slow down, get demotivated, have problems delivering next working version to production. Some teams even keep fixing bugs instead of delivering new features. They need ‘just a few more days’ to sort it all out.

Hype Driven Development (HDD) has many flavors and touches your project in many different ways:

HDD is how teams bring doom on themselves

The problem with hype is that it easily leads to bad decisions. Both bad architectural decisions and technological stack decisions often hunt a team months or even years later. In worst case they may lead to another very problematic situation in software engineering: The Big Rewrite. Which almost never works out.

The root of all evil seems to be social media — where new ideas spread much faster than they get tested. Much faster than people are able to understand their pros and cons.

The Anatomy of Hype

Most hypes have similar structure. Here it goes: The team is excited to show their work to the rest of the world and soon they write blog posts and do talks on conferences. The problem oftentimes is non-trivial, so they are proud to present the impressive results of a non-trivial solution. People get excited about the new technology. The only problem is not everybody who gets excited is able to fully understand what the exact problem was and all the details of the solution. It was a non-trivial problem with a non-trivial solution after all. Takes more than a tweet, chit-chat or even blog post to explain. With communication tools like social media, blog posts and conference lightning talks the message gets blurred along the way.

All shades of hype driven developers read blog posts and attend conferences. Soon the teams all over the world start using the new technology. Due to the blurred message — some of them make hasty decision to use framework even though it does not solve any of their actual problems. Yet the team does have expectation that this new technology will help.

As the sprints go by, the technology does not improve the team’s life as much as people hoped, but brings a lot of extra work. There’s a lot of rewriting the code and extra learning for the team. Teams slow down, management gets pissed off. People feel cheated.

Finally the team does retrospection and realizes what are the tradeoffs of the new technology and for what purpose it would be more relevant. They get wiser… till the next hype shows up.

Let’s examine some examples of hypes and see how those went through.

Step 1: Facebook has a problem — advanced one page apps like Facebook itselves have, so many state changing events that it is hard to keep track what’s going on and keep the application state consistent.

Step 3: Mania: Facebook has created the front-end framework of the future! Let’s write everything in react from now on!

Step 4: Wait there is a lot of work, but no quick return on investment!

Step 5: React is great for advanced one page app with lots of real-time notifications, but does not necessarily pay off for simpler applications.

Example 2: TDD is dead by DHH

Step 1: David Heinemeier Hansson (DHH, creator of Ruby on Rails framework) realises that it is hard to do TDD with Rails as this framework doesn’t have architecture supporting good OOP. Makes a pragmatic choice — not to write tests upfront.

Step 5: “TDD is not dead or alive. TDD is subject to tradeoffs, including risk of API changes, skill of practitioner and existing design” — Kent Beck.

Step 1: Big monolith application scales hard. There is a point when we can break them down into services. It will be easier to scale in terms of req/sec and easier to scale across multiple teams.

Step 3: Let’s rewrite all to services! We have a ‘spaghetti code’ because we have a monolith architecture! We need to rewrite everything to microservices!

Step 4: Shit! It is now way slower to develop the app, difficult to deploy and we spend a lot of time tracking bugs across multiple systems.

Step 5: Microservices require a lot of devops skills in the team and with right investment might pay off as a way to scale the system and team. Before you reach serious scale issues it’s an overinvestment. Microservices are extracted not written. You must be this tall to use microservices.

Step 3: Our database is too slow and not big enough! We need NoSql!

Step 4: We need to join tables? That is a no go. Simple SQL operations are becoming increasingly challenging. Development is slow and our core problems are not solved.

Step 3: Oh my good, our application is slow and our chat is not scalable!

Step 4: Wow, learning functional programming and distributed approach is not that easy. We are now really slow.

Step 5: Elixir and Phoenix is great framework, but takes significant effort to learn. It will pay back in a long run if you need specifically high performance app.

In this crowded space of computer engineering we have a lot of areas where hypes are common. In JavaScript world new frameworks are born everyday. Node.js (keywords: event programming), reactive programming, Meteor.js (keywords: shared state), front-end MVC, React.js. You name it. In software engineering new architectures are born: Domain Driven Development, Hexagon, DCI. What is your favorite hype?

So if we can’t rely on what the internet says and opinions of other people, then how to make clever decisions? Here come some good practises:

Test and research before you decide: When to go?   Hire the right people: