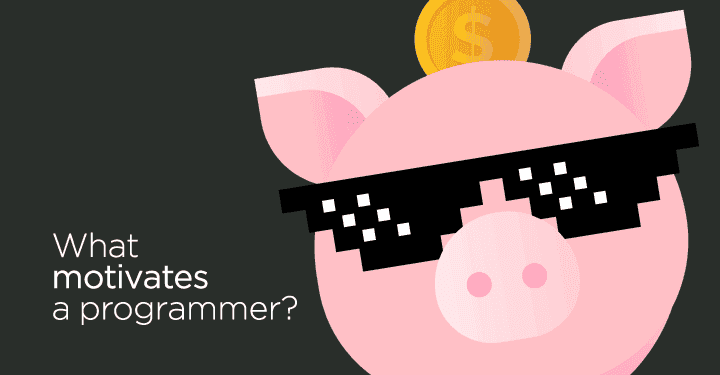 A big paycheck? Exciting projects? Appreciation? No extra hours? Let's check what motivates developers and what keeps them from changing their employers. It turns out money isn't everything.

According to a study „Barometr Pracownika 2015” conducted by IPSOS company, 40% of Polish workers from various branches think that their motivation is declining. Many of them express their disappointment because of the lack of work-life balance, others complain about the wages or simply, weariness. It seems that not all employers know how to solve this problem. You can follow the footsteps of a Chinese programming company and hire women-entertainers to motivate the employees, but we think it's better just to ask them what would help them work more efficiently. That's what we did. Here are the results of our „investigation” - some of the most popular programmers' motivators.

I can motivate myself if I get an interesting project to work on. Such a challenge powers me. It can be annoying if someone is constantly interrupting my work and interfering with my decisions. I count on trust and the ability to show what I can do.

American human behavior specialist, Alfie Kohn, once wrote in „Boston Globe” that creativity and motivation fade when a person is doing a task only for a profit. It means that prizes or bonuses aren't compelling motivators. Many programmers value just the opportunity to participate in an exciting project which will allow them to evolve and is challenging. Those projects should be ambitious, requiring creativity, radical solutions. Such projects get you out of a rut, help to gain freshness?? and cause programmers to show up at work not because they have to but because they want to.

High quality of a product

I approach a project differently when I know that the functionality I'm implementing will be used by many customers and will give the project new quality.

Nothing is as disheartening as the belief that you're doing meaningless tasks or working on a tangential project which will be used not so often and by only a few customers. Programmers are very ambitious, and most of all they would want to work on something of big importance. It's not always possible, but even those less important tasks can be adequately explained and motivating. A programmer must know why he's doing his job. The best thing to do is to let him affect the solution of a problem. This will make him more determined.

I don't like stagnation. I need to feel that I'm growing. It powers me. I know I didn't waste my time if I learned about the new issue. Even if I don't use this knowledge in practice, I will gain bigger perspective in other IT problems.

We already mentioned that programmers are very ambitious. Many of them are eager to gain knowledge, learn new technologies, solutions and programming languages. This area is a place for HR department to present as many courses as possible and be flexible about the worker's choices. Often programmers want to learn new issues not necessarily connected with current projects the team is working on. Many developers know exactly in which direction they want their careers to progress and so they choose courses which will help with the development. Some of their new skills will be used by the employer but some of them won't. The important thing is to enable programmers courses of their choosing because they can be incredibly motivating. A programmer will develop new skills with the support of his company and hence, the quality of his work will improve.

Do I like being praised? Who doesn't? We are all more or less self-conceited. If I did the hell of a job, I want to know it was appreciated. What's wrong with that?

The quality of our work can differ. But once a programmer commits to his job, not for 100, but even 200 percent he wants someone to notice it. Same applies to challenging a difficult task. No wonder that the appreciation is one of the key motivators. The employer should appreciate their employees. Programmers must feel important for a given project, know that they carry out their tasks well. Sometimes it's enough just to tell them that.

We presented some of the most popular factors motivating a programmer, but you can find much more, like for example providing adequate tools or carefully planning the work. A well-motivated programmer will gladly show up at work because it will give him enjoyment and satisfaction. Confucius once said: „Choose a job you love, and you won't have to work another day in your life.” That's what we wish everyone, even if it's a bit too idyllic.