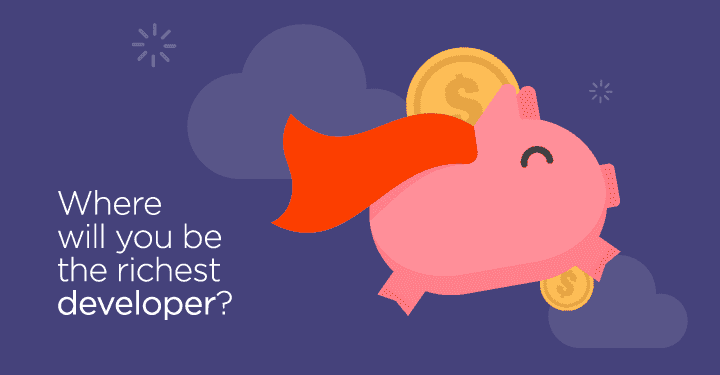 IT is an industry most often providing jobs in an international environment. At the same time, the demand for experienced programmers makes it easy for them to find jobs around the globe. Some cities are more desirable than others.

Last year, in one of our articles, we wondered why programmers want to work abroad. It turned out, the biggest stimulus was a bigger paycheck. But it's not the only reason. Polish developers are eager to look for employment abroad because of better prospects for career growth and gaining experience. It doesn't mean that programmers can't get those things in Poland. Working abroad gives another perspective, a chance to know another work culture, widening your horizon and sometimes just having a new adventure. Some people decide to travel abroad because they want to change something in their lives, escape routine, get to know different cultures. Some coders just want to see for themselves, if working outside of Poland is really more attractive. Each of those people has their own reasons. According to studies conducted by Antal 79% of Polish developers wouldn't mind working abroad, but 37% of them would wish to reduce this period to three years maximum. Polish programmers most often choose to move to Germany, Great Britain or the United States. Are those the most financially attractive choices? We decided to check which of the metropolis worldwide are the best choices for programmers. Where will they save the most money?

To create our ranking of cities we had to adopt a few premises, which allowed us to compare living standards in each of metropolis. We decided to create our ranking for a position of Senior Software Engineer. To determine the amounts of wages we used data from Glassdoor and converted different currencies to American dollars. Costs of living and rent were established according to data provided by Numbeo. All expenses and incomes are monthly. Because the wages provided by Glassdoor are given pre-tax we used tax calculators to convert them to net.

Converting pre-tax prices to net is a difficult subject because it is determined by different aspects in each country. In some of them, it depends on marital status or a number of children. We calculated all expenses for a 30 years old person without kids. Incomes don't include optional bonuses.

It's also important to note, that expenses provided in our ranking are rather conservative. Numbeo allows you to adjust them to your preferences such as the frequency of dining in restaurants, the number of clothes bought, means of transportations used etc.

This article's purpose is to start a discussion about work opportunities in various countries, rather than stating that place A is better to live and work in than B.

San Francisco is declassing other analyzed cities in terms of Senior Software Engineer's monthly income. Big income also translates into most money saved at the end of the month. But expenses in San Francisco are also the biggest. The greatest concerns are probably raised by the cost of rent (which San Francisco is famous for – we wrote about it in an article about emigrating programmer). For a studio apartment in San Francisco, you will pay 285% more than in Berlin. Also, the prices of goods and services are higher by 39%. Senior Software Engineer would handle such costs but they might be too much for IT beginners.

Berlin is one of the top choices for a programming career abroad. It's cheaper than San Francisco but a more expensive than Warsaw. Average monthly expenses in Berlin are higher than those in Warsaw by 52%. To maintain a similar standard of living in both of those cities you should be making $3,768 in Berlin and only $2,460 in Warsaw. The biggest difference shows in food prices – you will pay 60% more in a grocery store in Berlin than in Warsaw. Rent in Berlin is higher than in Warsaw by 49%.

Taxes in Germany are calculated based on your marital status and how many children you have. Bare in mind, that you will often receive various bonuses, which will increase given income.

Programmer's life in Finnish capital allows saving only $1,379 every month. Unfortunately, life in Finland is more expensive than in Berlin. To maintain the similar standard of living you would need $3,825 in Berlin and in Helsinki $4,665. Costs of goods and services in the capital of Finnland are higher than those in Berlin by 16% and for rent, you will pay 22% more.

The monthly expenses index in Helsinki is higher by 84% comparing to Warsaw.

To calculate tax amount you need to take into account your marital status and the number of children. Programmers can count on big bonuses.

Although in London a developer can count on bigger income than in Helsinki, he has to take into account bigger expenses, which as the result makes London more expensive and less desirable destination for Polish coders. First of all, we want to point out very high prices of rent. In this ranking, only San Francisco is more expensive.

The monthly expenses index in London is higher than that in Warsaw by 87%.

On the plus side – London programmers can count on big bonuses.

More and more often Arabic countries open their doors for foreign programmers. But is Dubai really worth moving to? The most encouraging is probably the 0% income tax. It allows you to save the most money, even if the income in Dubai is smaller than in American or European cities. Unfortunately, you need to take into account high costs of rent – lower than those in London only by 2.69%, but at the same time a whole lot higher than those in Helsinki or Berlin. It's an exotic alternative for European IT centers.

The monthly expenses index in Dubai is higher than that in Warsaw by 54.92%.

Let's discuss Warsaw. Here developers will earn less than in previously discussed cities. Warsaw, however, outruns Moscow, where programmers not only make less money but also have to face bigger expenses. The biggest upsides to pursuing IT career in Warsaw are low costs of living and the income, which compared to other occupancies is a lot bigger. Therefore, as long as you will economize, you can save a good deal of money.

Comparing with western countries, IT specialists in Polish companies are less likely to receive bonuses.

Definitely, Moscow is the least programmer-friendly city. Firstly, low income. Secondly, bigger costs of living than in Warsaw results in very little money saved at the end of every month.

We hope that our ranking shed a bit o light of the possibilities of working abroad. Maybe you already are working in one of those cities? If so, let us and our readers know about your experience so far!