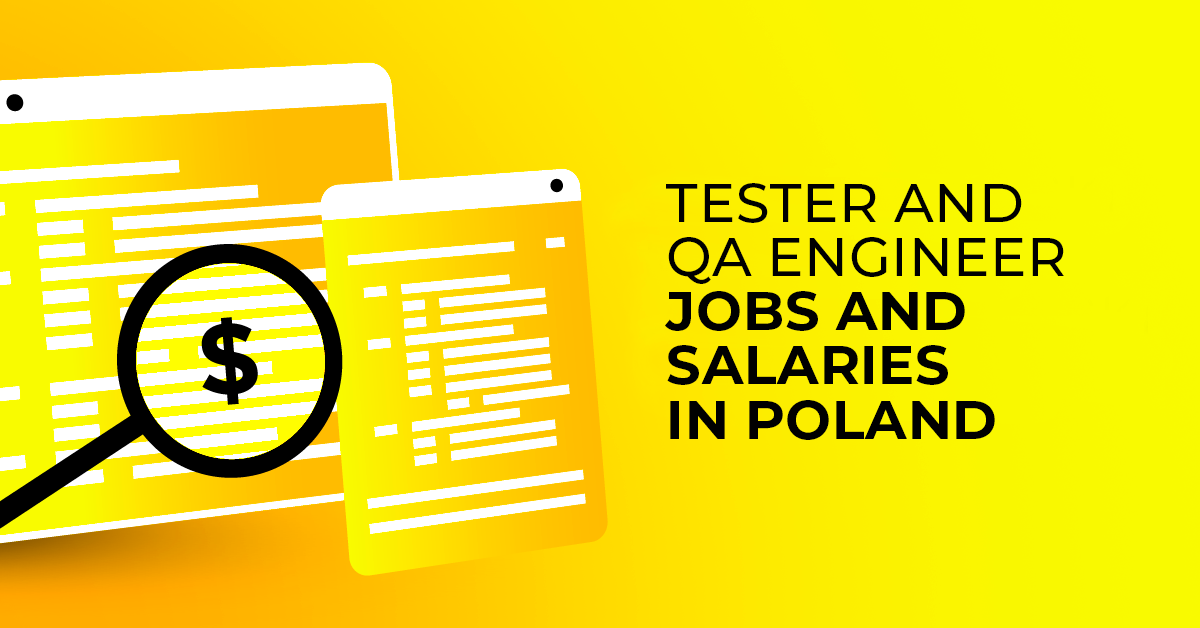 Testers are specialists in finding bugs in software. They are responsible for verifying the software before it goes out to the client. They look for "holes" that make it difficult to use apps, games, websites or banking systems. Apart from technical skills, employers very much value in testers such traits as inquisitiveness, perceptiveness, logical thinking ability and a proclivity to challenge assumptions.

Many people who want to try their hand at IT are interested in this profession because a career as a tester can be started without knowing a programming language. Which does not mean that this skill is not useful for the tester ?
What specifically do testers do? What is their situation in the job market in Poland? And most importantly, how much do they earn depending on experience or type of contract?

We invite you to review the most important information about working as a tester based on the latest IT Community Report, in which more than 7,000 IT professionals and people preparing for work in the IT industry took part.

Nearly one in five IT professionals is already a tester. Theoretically, software can be released to the market without testing, but fewer and fewer companies choose to do so because of the business risk, high customer expectations, and potential loss of reputation. Not surprisingly, there are more and more testers in the ranks of IT companies. Currently, nearly one in seven IT professionals is a tester. That means that it is the second most numerous group of IT specialists in Poland (17%), ranking behind the most numerous programmers (57%).


Testers are most often engaged in verifying web applications

Testers have a lot of responsibility, because they are the ones who verify that the created software works without problems and can be handed over to customers for use. Many products created by developers come under the watchful eyes of testers.

What do testers most often "investigate" when looking for programmer shortcomings? As many as 76% of all testers verify the functioning of websites/web applications. Besides, testers test APIs (55%), mobile apps (35%) and desktop apps (32%). Additionally, testers are increasingly entrusted with verifying IoT (8.5%), security tools (5.4%) or games (4%).


What does a tester spend their day on?

Testers have their hands full as they test not only new products but also single software changes and system updates. The most popular tester tasks include: writing and maintaining test cases (81%), creating documentation (61%), creating reports (47%), maintaining test and development environments (45%), analyzing data (34%), and writing code (31%). Although most of the tester's workday is filled with the above duties, they also do many other things like writing User Stories (23%), gathering requirements (20%), and integrations (20%), among others. As a tester, you certainly won't be bored!


How does the tester know what to test?

According to the testers opinion, their own experience from previous projects is the most helpful in finding software defects - as much as 79% of representatives of this professional group think so. In addition, User Stories (66%), formal requirements (65%), exploratory testing and heuristics (58%) provide clues as to what to look for. Tester effectiveness is also fostered by collaboration, as 59% of our respondents said that during brainstorming and team meetings they gain valuable information on which areas to focus during testing.

Among the expectations of employers looking for testers with Bulldogjob, we very often see "taking care of their craft". This is necessary to deliver high quality testing, but also to simplify some tasks through automation for example.


Most testers know at least one programming language

There are already 78% of testers who claim to know a software language, while 22% don't know any yet. The most popular among testers who know software languages are SQL (52%), Java (38%), Python (43%), HTML/CSS (32%), JavaScript (27%). Although a tester doesn't need to know SQL or Java at the beginning of their career, knowing a programming language will help you a lot and increase your ratings in the job market.


The tester is usually a autodidact

Just a few years ago, there were no studies dedicated to the field of Quality Assurance (QA), so self-improvement of skills is inherent in the testing profession. In fact, software testers most often acquire knowledge on their own. As many as 80% of testers who know at least one programming language learned it on their own, using books, the Internet or free courses.

A big help in tester's work are automated testing scripts that relieve testers from tedious, repetitive work. It seems that testers like to make things easy for themselves, as most of them create automated tests, which necessarily requires knowledge of some software language (e.g. Java or Python).


The least experienced among IT professionals

As many as 65% of testers asked in the IT Community Report about their career aspirations say they want to become an expert in their field. Only 35% of testers want to grow professionally to manage teams in the future.

What career paths do testers want to take? Although working in software testing opens many doors for them, the majority, 65%, still want to be working as a tester or test manager in a few years. Only 26% want to change their specialization in the future. Among those surveyed, 7% do not have a clear vision of the future and do not know where they want to be in a few years.

Now let's talk about money. As in the case of all other IT specialties, the salary level of a tester is strongly influenced by experience and form of employment. Your salary depends on whether you have an employment contract, a B2B contract, a freelance contract or a contract of mandate.

Depending on your preferences, your own vision of financial security, where you live, or your level of experience, you may choose to work in different forms of employment. The IT market is meeting diverse expectations and increasingly showing flexibility in this area, leaving the decisions to the candidates.


Specifically what salary you can expect as a tester?

A manual tester who is self-employed and has a B2B contract with a company earns on average 10,589 PLN net, i.e. all dues and taxes must be deducted from this amount. In the case of an employment contract, a Tester earns on average 4946 PLN net, and in the case of a contract of mandate or contract for specific work - he/she collects 4490 PLN net monthly. In the industry, it has already become accepted that contracts of mandate and contracts of specific work are usually offered to beginners in testing; as their work experience grows, IT professionals join the ranks of "freelancers" and work on a B2B contract.

The salary level of a tester is significantly affected by whether he can create automated tests. An employee with these competencies earns more compared to professionals who have not mastered this one. What does this "more" mean?

A tester who creates automated tests will earn on average 1774 PLN more take-home with an employment contract, 309 PLN more  with a contract of mandate or contract for specific work, and 3756 PLN more with a B2B contract. Below you can find a detailed charts that illustrate the differences in salaries.

And what salary can beginners in testing expect?

Some of the respondents to the Bulldogjob IT Community Report were individuals preparing for working in IT industry. For them, it will be valuable to know what amounts a tester starting out in their career can earn. Junior on the contract of employment can expect the amount of 4268 PLN net. In B2B, on the other hand, it is 7173 PLN on the invoice. As a junior, you can earn on average 4318 PLN on a contract for specific work or contract of mandate.


Where to look for a job as a tester?

Already a tester, but want to change job? Or are you just planning to become a tester and are looking around for lucrative offers? No matter what stage of your career you're at, be sure to ask your friends about development opportunities.

As it turns out, they are the best source of employer knowledge. All because of the recommendation systems that have been developed for many years in companies that, in order to attract talent from the market, encourage employees to recommend candidates from their environment.

At least, that's the view of IT professionals, who were most likely to learn about their current employer from friends (29%).  In addition, industry job boards (25%) like Bulldogjob, are invariably a valuable resource .

Now you know what you can expect when working as a tester in Poland. It's about time you drop over to Bulldogjob and see what tester jobs are waiting for you. Good luck!